Maybe it’s wishful thinking, or just a bout of doomsday paranoia, but the State of California ranks at the top of the list for UFO sightings (at least, as of 2017). Usually they can be explained away — especially since they tend to happen near airports and military launching sites.

But all of these rocket launches lighting up the southern California sky as of late (we’re looking at you, SpaceX) have got people thinking: If those colorful streaks really were the light trails of an alien spaceship coming into land (or, at least, taking a good gander of what’s down here), what would we do?

After all, we spend a lot of time looking for them — be it through JPL’s rover launches of the giant radio dishes of the Goldstone Deep Space Communications Complex out in the middle of the Mojave Desert. If they’re out there, they must be looking for us, too. 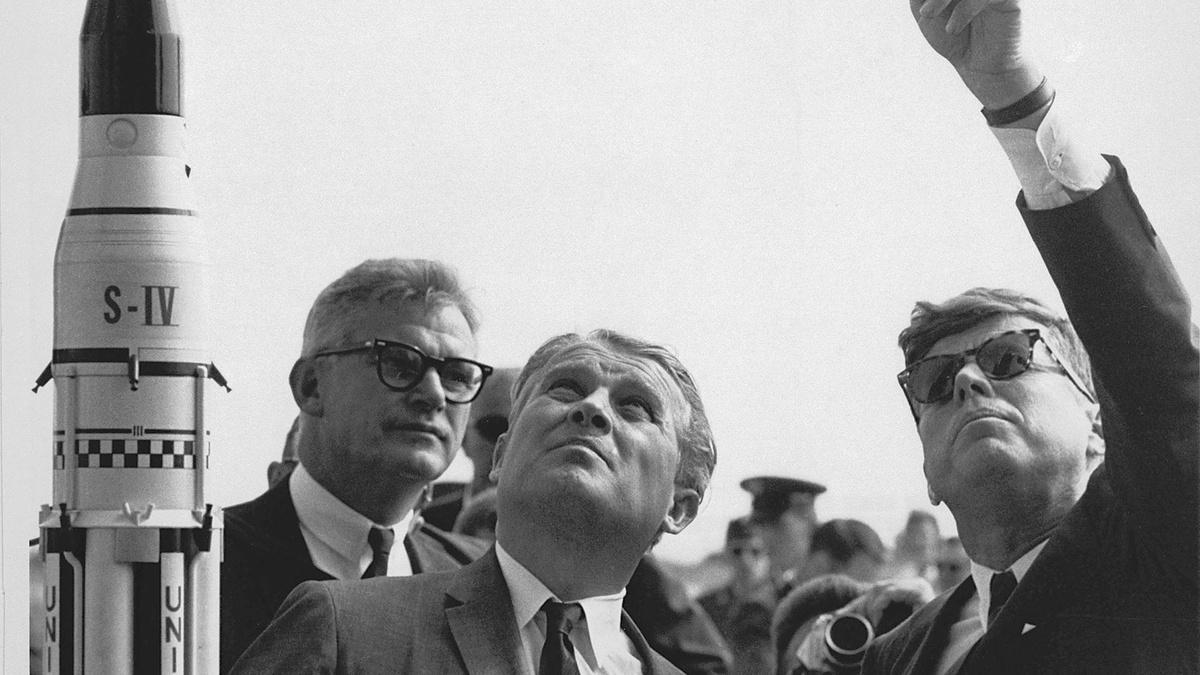 As much as Nevada is known for Area 51 and its Extraterrestrial Highway, and as much as New Mexico has become notorious for is UFO incident in Roswell, California has written its own chapter in the alien history of the Western U.S. — and not just with Hollywood productions of “E.T.” and “Close Encounters of the Third Kind.”

Whether you’re a Mulder, a Scully, or an alien yourself, here are the five best sites where you can experience SoCal’s extraterrestrial history – and look for signs of life beyond our own planet.

1. The Integratron and Giant Rock, Landers

Most visitors to the High Desert know the Integratron as the white, dome-shaped building where you can get a so-called “sound bath” to recharge your battery and restore your energy. But this acoustically perfect wooden structure is so much more than a sound chamber — because aviator, Douglas Aircraft engineer, and ufologist George Van Tassel designed and built it in 1959 upon the instructions he received during a supposed extraterrestrial encounter at a 25,000-ton granite formation known as Giant Rock. At nearly seven stories high, it’s one of the largest freestanding boulders in the world — and the former site of an airfield, a sacred site for Hopi shamans, and a theoretical time machine. You can access this geological oddity on BLM-managed land by driving three miles on a dirt road.

Van Tassel funded the initial construction of the Integratron – and his subsequent work on it, which continued until his death in 1978 — by hosting annual “flying saucer” conventions for fellow “contactees” and believers at Giant Rock. Influenced by the theories of sacred geometry, Van Tassel chose to build the Integratron at the confluence of five underground rivers, on a site that’s reportedly a locus of high geophysical and electromagnetic energy — theoretically because it would help to rejuvenate not only the energy centers of the body (a.k.a. chakras) but also living tissue. Unfortunately, Van Tassel never really finished his energy machine by the time he passed away — and it no longer spins or creates its own lightning. To experience the vortex of the Integratron yourself, you can book a spot at a public or private sound bath or one of its “Sacred Geometry” events. Arrive early to peruse the archives on the first floor (which include historic photos, newspaper clippings, floor plans, and other reference materials). And get ready to have the sonic stylings of some quartz crystal bowls played live — and feel vibrations in parts of your body you never knew existed.

The Fort MacArthur Museum was established in 1985 to use Ft. Mac’s historic structures to interpret World War I and II history for the public — located right on a decommissioned and declassified section of the old fort. You can visit the museum on weekends and select weekdays when it’s open and not being used as a film location, but there’s one chapter in its history that you can only experience at the fort once a year — and that’s a reenactment of a controversial night in 1942, known as “The Great Air Raid.” Also known as the “Battle of Los Angeles,” a big band dance party is suddenly interrupted by some kind of “flying object” — just like that fateful night, three quarters of a century ago.

Although L.A. hadn’t been attacked during the bombing of Pearl Harbor just a couple of months prior (and would never see an attack), its harbor had been operating under martial law. Paranoia was at an all-time high. So, when searchlights failed to illuminate the object in the sky enough for troops to figure out exactly what the thing was, they sounded air raid sirens, and blacked out practically the entire coast of southern California by military order. They fired guns for nearly an hour in the middle of the night at… something. What was it? Well, every witness (and there were a lot of them) had a different story of what they saw up there. The Glendale News-Press named it a “mystery invader.” The St. Cloud Daily Times identified it as an “enemy blimp.” And the Long Beach Press-Telegram simply called them “strange planes.” But could it really have been just a “false alarm” — nothing to blame but “war nerves” getting the best of those whose fingers were on the trigger? You can judge for yourself and witness the events of the evening at the museum’s annual reenactment, which occurs every February.

It’s both baffling and misunderstood — at times described as “three wishbones in search of a turkey,” “The Psychedelic Nickelodeon,” and “The Schlockenspiel.” In fact, it’s probably the most controversial piece of public art in L.A. It’s the Triforium, a three-pronged, six-story public art piece that has been silenced since the 1980s and has stood inert for decades. Outfitted with dozens of incandescent bulbs, most have broken or simply stopped burning by now. Originally intended as an interactive, technologically advanced sculpture of sound, color, and light, it never quite reached its full potential. Laser beams were supposed to shoot out up into space from the top, blinking “Los Angeles” in Morse code to whichever extraterrestrial entities out there might heed the astrological beacon.

Back in 1975, when it made its debut in downtown L.A.’s Civic Center district, it was supposed to blow your mind. Instead, the disco-tinged chimes of the bell tower fell on the Southland with a resounding thud. What its creator, mosaicist Joseph Young, originally intended for the kaleidoscopic, futuristic sculpture may have been too ambitious (or audacious) for its time, but no one got to see that intention come to fruition. It was never truly interactive. It could never have been considered kinetic. Thankfully, the Triforium didn’t ruin Young’s career working with tile, but the folly of this so-called “million-dollar jukebox” was so great that the artist hosted a “memorial service” for it just two years after it first opened. But now, this technological artifact has captured the imaginations of a new generation of art lovers who are trying to not only preserve it but also to leverage four decades’ worth of technological developments to make the Triforium do what it was always meant to do (but never got the chance). Although currently dark and silent, the Triforium is permanently on view at Fletcher Bowron Square at the corner of Main and Temple Streets, on the plaza outside the Los Angeles Mall.

Mono Lake is where sun, sea, and mountains meet — in a simple ecosystem where geology evolves before your very eyes. Water levels rise with the melt of the nearby mountaintop snowpack. Rivers and streams flow in, and nothing flows out. Phalaropes migrate to Bolivia; ospreys nest. Creatures feed on each other. And otherworldly formations arise from the bottom of this inland sea. All of this has made Mono Lake a great destination for multiple generations of enthusiasts of photography, birding, and even boating. But eight years ago, scientists made a discovery deep in the bottom of the lake that caused quite a bit of excitement over bacteria — and the possibility of life on other planets.

The key to the extraterrestrial plausibility is that the “bug” they found in 2010 can not only survive exposure to arsenic (which is found in abundance in Mono Lake) — but it can thrive on it. And while it still needs phosphorus to survive — as other earthly strains of bacterium do — it only needs a tiny little bit of it.

So, what does this have to do with aliens? Well, most of our research into conditions on other planets finds their atmospheres, temperatures, and physical compositions to be absolutely inhospitable — but only to those creatures whose biological needs for survival we fully understand, because they’re found here on Earth. Who’s to say that alien life forms process oxygen, heat, carbon, chlorophyll, etc. in exactly the same way? What’s toxic to us may very well be downright healthy for sustaining life out there. Who knows? But if we were to find any true “alien” bacteria, Mono Lake would certainly be a good place to look.

If you’ve ever made the drive between L.A. and Vegas, you’ve surely passed through the town of Baker — a roadside attraction if there ever was one, as the home of The World’s Tallest Thermometer, which displays the current temperature in Death Valley — that is, when it’s working. But even when it’s not, as it towers 134 feet above the Mojave Desert floor, it could most certainly act as a beacon for alien life that might be considering touching down on southern California. And maybe that’s already happened — because down the road, you can buy supposedly extraterrestrial meat at Alien Fresh Jerky.

And sure, it’s fun to pose for photos with statues of little green men, but Luis Ramallo — owner of Alien Fresh Jerky — has got even bigger plans for Baker, and they’re ones that George Van Tassel would probably approve of if he were alive today. Ramallo has created plans to build The UFO Hotel in Baker — a destination for Area 51 looky-loos and perhaps aliens from a foreign planet as well. After all, his design calls for it to be built in the shape of a mothership, as though it had just landed right there in Baker. While there’s been plenty of interest from those who want to believe, completion of the “out-of-this-world experience” has been stalled over the last couple of years. But considering the fact that the only nearby property you can stay at right now that’s even remotely similar is the Little A’Le’Inn (get it?) in Alamo, NV, maybe it’s time for Ramallo to start hosting some UFO conventions at Alien Fresh Jerky to raise the funds for his flying saucer hotel.