To call The Industry a site-specific opera company is to only scratch the surface of what this groundbreaking organization is. Yes, their productions are sometimes staged in a single location, but more often the show moves, and the audience moves along with it. Their opera, “Hopscotch,” was set in cars. Their adaptation of Orson Welles’ “War of the Worlds” broadcast of 1938 occurred simultaneously in locations throughout Los Angeles.

Their latest, “Sweet Land,” a look at our country’s bloody origins and the myths we’ve built around them, was staged in several sections of Los Angeles State Historic Park in Chinatown in late February for 13 performances (including previews), before being shut down by COVID-19. Today, its spirit lives on not only on their website where it can be streamed, but in the current real-world push to dispense with symbols of a romanticized past that don’t square with the bloody facts, whether they be town square statues or logos of professional sports teams. 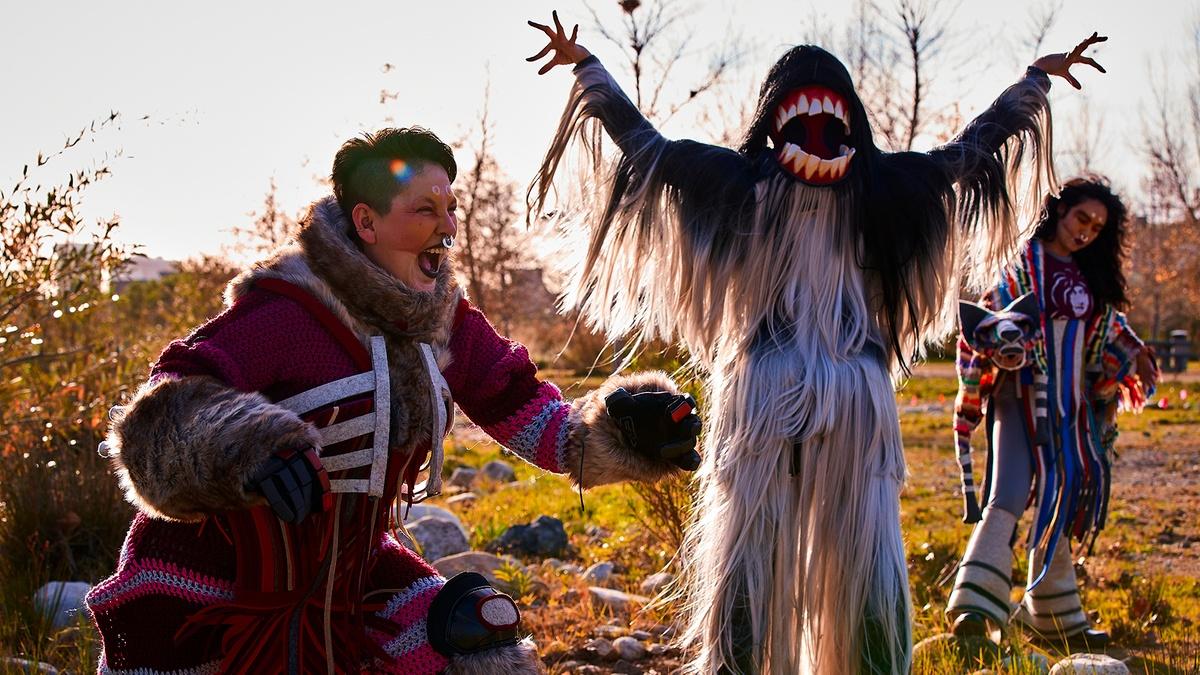 “It’s strange to think of ‘Sweet Land’ in relationship to everything that’s happened in the last few months, including being shutdown by a pandemic that has been brought from outside this country,” says Artistic Director and founder of The Industry, Yuval Sharon, drawing parallels between the fate of the opera’s characters and the fate of many Native Americans. “The idea of a pandemic wiping out a piece that is ultimately about Indigenous natives is a truly cruel irony.”

The audience arrives to a pre-show percussion improv before they are split into two groups, with one being ushered to “Feast” and the other to “Train.” “Feast” begins when European immigrants arrive on the shores of the “New World,” where they are honored by local hosts with a feast. Sitting down peacefully together, the arrivals soon turn on their hosts.

After an interstitial in which Coyote (Carmina Escobar/Micaela Tobin/Kathryn Shuman) and Wiindigo (Sharon Chohi Kim) deliver antic performances to the music of composers Raven Chacon and Du Yun, the audience lands at another feast, one set after the arrivals have “tamed the land” and subjugated their hosts. “Train” traverses a similar arch, this time focusing on industrialization and ravaging of the land.

The audience is again reunited for the opera’s final section, “Echoes & Expulsions,” in which a little boy, Speck (Micah Angelo Luna/Leander Rajan), putters around a makeshift shelter in an empty lot as a subway passes in the background, and the voices of history are projected in phrases on a bridge, billboard and other surfaces.

“Sweet Land” opened just months before the current reexamination of past symbols resulting in statues of Confederate generals being toppled in public squares around the country. “The political moment, with Trump’s election and watching the rise of the President’s unvarnished use of white supremacist language, you can look at that and say, ‘I see where this train is going,’” says librettist Douglas Kearney about the show’s uncanny prescience.

On a recent visit to New Orleans, Sharon stopped by Jackson Square, named in honor of President Andrew Jackson. The only law Congress passed during his tenure was the Indian Removal Act of 1830, which he championed and which resulted in the Trail of Tears, a relocation effort that cost over 12,000 Native Americans their lives.

“Even though it’s not my ancestry, it makes me upset to see that in this public space, someone like that can be held up on a pedestal,” Sharon says. “If you take that statue down and put it in a museum and allow people to engage with history in a deeper way, I think that’s the right way to do it.”

Mezzo-soprano, Jehnean Washington, plays the Guide in “Train,” and happens to be a descendant of the Yuchi, Shoshone and Seminole nations. “They represent such hurt and such harm, like the Nazi flag,” she says of the deposed monuments. “I don’t feel like they need to be in a museum. I feel like we are the living testimony to what those people did. We don’t need a statue to remind us.”

“Sweet Land” is the sixth production by The Industry since their founding in 2012. Their site-specific opera “Invisible Cities,” based on the novel by Italo Calvino and set in downtown L.A.’s historic Union Station, was a 2014 Pulitzer finalist. And Sharon himself is a MacArthur “Genius” winner from 2017, two years after “Hopscotch,” the opera in cars, a production that in many ways is emblematic of The Industry.

That opera was a series of thematically connected narratives occurring in locations throughout downtown L.A. and Boyle Heights. Ticket buyers boarded a limo with the opera simulcast on speakers, and experienced performances both inside and outside the vehicle along its route. The multi-pronged narrative employed here and elsewhere in their repertoire — the idea of giving audiences only part of a larger scheme — has become an Industry staple. The same approach was applied to “War of the Worlds,” broadcast through three antique air raid sirens around town where scenes played out simultaneously with the L.A. Phil performing at the Disney Concert Hall.

“I don’t have a musical background, and Yuval has been pretty expressive about thinking poets are the best librettists,” says Duncan, whose debut poetry collection, “Restless Continent” won a 2017 California Book Award. “One amazing aspect of working with The Industry is they really invest in collaboration and relationship building.”

Kearney found the soup of creative voices generated an exponential increase in the decision-making process. “You’re trying to understand the sensibility of two composers and how they’re triangulating between themselves and the director, and then add another librettist. Then the question is what kind of stories do we want to tell and can we tell together?” he says, describing a convoluted, but ultimately rewarding process. “Yuval is deeply invested in how production can transform opera, especially contemporary opera.”

“Opera is, for some people, the epitome of cultural hegemony. So, there’s a tension there that I think is really fruitful. Certainly a big mission for The Industry is to think about opera away from all of its rigid structures, liberate it to see how we can truly speak to a moment by creating something brand new,” says Sharon, formerly Artist-in-Residence at the LA Phil. “A piece like ‘Sweet Land’ is impossible to imagine within the current institution of opera ‘cause it does not allow these kinds of representations. So, The Industry has to push hard and move the conversation forward from the outside, and put pressure on the core of what opera is and think about how it can live up to a higher standard.”

“Sweet Land” lives up by exposing the process of erasure — how white America has dominated the country’s historic narrative and whitewashed it with its own mythology — the way toppling icons exposes the blood-soaked truth. A great way of honoring that truth is to not hold campaign rallies on sacred Lakota land like Mt. Rushmore, carved by KKK member Gutzon Borglum.

“They were desecrated by the carvings of white Presidents and Jack-ss number forty-five makes a spectacle there,” Duncan says of Trump’s campaign stop, adding, “we should remove those edifices like the statues of Civil War generals and racist Jim Crow f—kers.”

As for the recent Supreme Court ruling in Oklahoma that put the eastern half of the state, including the city of Tulsa, under tribal jurisdiction, Duncan wonders why it usually takes the Supreme Court for her people to get what’s guaranteed them in 19th-century agreements. Mezzo Jehnean Washington sees the ruling as a watershed moment. “It’s a wonderful turning point and it sends a message throughout the globe that this kind of behavior of lying and cheating and ripping people off is not going to be tolerated anymore.”

Like many, Sharon, a first-generation American whose parents emigrated from Israel, was educated along the lines of the white settler fantasy, Manifest Destiny and the westward expansion. “All of that ideology is a big part of what we’re still taught about our country. This is particularly important in Los Angeles, which has an enormous culture of forgetting and loves to pretend everything is sui generis and nothing has history,” he says of an area that was formerly home to the Chumash, among other tribes. “You realize it carries with it a pretty insidious look at nation making. It tends to erase populations that have made it a home long before white settlers arrived.”