It’s 10 a.m. on a Tuesday and Watts Coffee House is packed. Desiree Edwards, who has operated the restaurant since 1997, points out a group gathered around a table. They’re retired Los Angeles Department of Water and Power (DWP) employees who meet here once a week. “Every Tuesday, faithfully,” she adds.

Different days bring different crowds who eat regularly inside this space that Edwards describes as a “museum restaurant.” In nearly every corner of Watts Coffee House, there’s something to see. A cut-out of former President Barack Obama stands near the entrance. Above a dining area are classic record sleeves from comedians and musicians like Richard Pryor, Redd Foxx, Lena Horne and Count Basie. Vintage concert posters hang on a back wall and in between the ephemera are signatures of some past visitors. Edwards rattles off names — Tony! Toni! Toné!, Mark Ridley-Thomas, a few Harlem Globetrotters — but she makes a clarification. “Everybody is VIP in here,” she says. 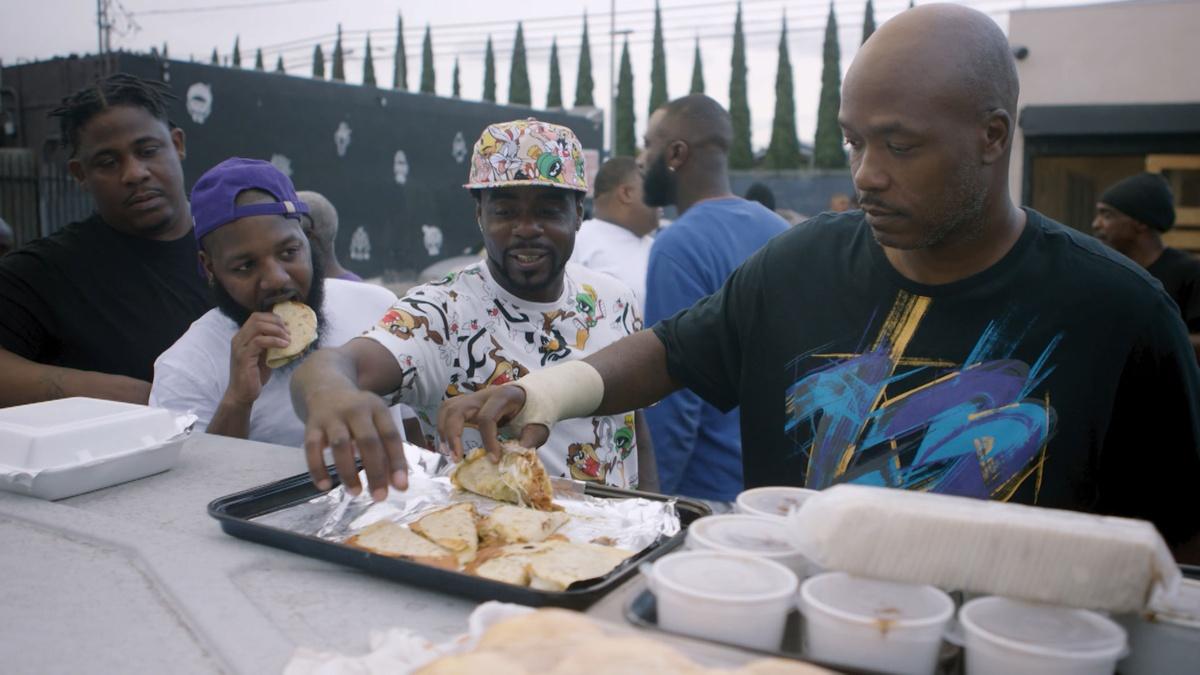 Hear more from Edwards about what Watts Coffee House means for the community in “Broken Bread” episode – S1 E6: Watts.

Watts Coffee House initially opened in the aftermath of the 1965 uprising. Decades later, Edwards was catering for the Watts Health Foundation, which, back then, was managing the building on 103rd Street where the restaurant is located. She recalls one event in particular. “It was for young men and they were giving scholarships to C students,” she says. “I was so overwhelmed and impressed.” Edwards appreciated how the organization provided opportunities to students who may have otherwise been overlooked. So, when they asked her to take over Watts Coffee House, she said yes.

Edwards’ opportunity came with a few stipulations. She was asked to hire people from the community, including the drug rehabilitation facility House of Uhuru, and to essentially build a spot for the community. “This was put here not to make money, but to help people,” says Edwards.

Even though management of the building has changed since then, Edwards has kept up with that mission. “I work with anyone who tells me that they have someone that has a desire to enter into this business,” she says. “I talk to them. If they’re really serious, I give them the opportunity.”

And, for the people who have come through Watts Coffee House, the opportunity that’s provided here can work out very well. “Many people have come through here and gone on to greatness,” she says. “They’re doing great things.”

Watts Coffee House is tucked into the bottom level of a building on 103rd Street, below the charter school College Bridge Academy. At one point, Edwards had a training program for the school kids. That’s not currently happening, but she still shows support for the school by donating food for their graduation dinner.

Edwards also helps out with other community events. This month, Watts Coffee House will be helping out with Jordan High School alumni’s annual fundraiser breakfast. It means a long day for the staff. Edwards says that they’ll plan to arrive to work at about 2 a.m. to prepare the food that the alumni group will bring — enough to feed about 400 people — before Watts Coffee House opens for regular business at 8 a.m.

Ordinarily, they’ll arrive at 4 or 5 a.m. to prep for work. Sometimes, they’ll get calls from customers as early as 6 a.m. Edwards has to remind people that they don’t open until 8 on most days (10 a.m. on Sundays) and that they’re closed on Mondays. “I love that a person is lying in bed, waking up and thinking, let me call Watts Coffee House,” she says. It’s a testament to the restaurant’s enduring appeal. Under Edwards’ guidance, the spot has been open long enough where, she says, they’ve watched kids grow up, leave for school and return to raise their own families.

Edwards’ connection to her customers is obvious on this day. Some talk to her from across the restaurant. Others come up and greet her when they’re leaving.

Watts Coffee House serves lots of classic American fair, from pancakes to tuna melts and, Edwards says, “a lot of love.” These are dishes that she describes as “the traditional food that makes your soul happy.” But you don’t have to stick with an order exactly as it appears on the menu. Edwards says that she’s proud of letting customers know that they can customize their orders, and that’s led to items that are named for some of the regulars. The Henderson — a chicken sausage sandwich with egg white, tomato and cheese — is an example of that. “It has more meaning,” Edwards says of naming plates for customers.

Ultimately, Watts Coffee House is a restaurant that is about the community that eats here. “You build a bond with your customers. You know what they like,” says Edwards. “I think that’s so important.”